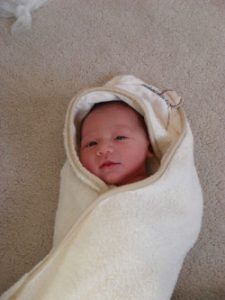 Seeing the blue line appear on the first, second and sixth pregnancy test I did was the most exciting moment of my life, however my excitement was tinged with fear. I repeatedly experienced bleeding which meant I had to regularly attend hospital appointments for the first few weeks of my pregnancy. The doctors were great but kept using terms like ‘failed pregnancy’ and even advised me when to start trying for my ‘next baby’. I felt like I was just another pregnant woman to them and was on some type of factory line which was emotionless and full of medical terms which did not relate to my idea of being pregnant or having a baby.

Anyway my excitement grew as my bump did and when I was a few months pregnant a colleague gave me a leaflet for hypnobirthing. I read it out to the girls in my office only to be greeted with laughter and horror stories of childbirth. I put the leaflet aside but something made me keep going back to it. I liked the idea that childbirth did not have to be a medical event and I also liked the idea that I could remain in control and influence how it went (I am somewhat of a control freak!).

We arranged sessions at Sandra’s house and each week I looked forward to learning new relaxation techniques and the practicalities of what birthing would be like. My pregnancy progressed and soon I reached my ‘guess date’ of 29th October. Each day I religiously practised breathing techniques, relaxation scripts and exercises. By the 7th November I was becoming anxious as midwives were talking about sweeps and inducement. This would mean that I would not be able to attend the midwife-led birthing centre I wanted to. Sandra offered to do a session with me the day before I was due for a sweep in order to release any fears I may still have. We discussed when I would like to have my baby and Sandra asked me to imagine the specifics of how this would happen. I imagined driving to the hospital at 4:30 the next morning.

We finished our session at 6:30 that night and I drove home picking up tea on the way. As I took my last bite I had my first surge at 7:30pm. I had 3 more, 15 minutes apart before they rapidly moved to 5 minutes apart. By 2am I was at the birthing centre. I was examined and told that I was 1cm dilated and I would probably be sent home. I was disappointed to say the least but tried to remember the advice Sandra had given me. I laid for a while listening to my relaxation cd and using breathing techniques through the surges, imagining my baby moving its way down. The midwife agreed to let me have a bath and it was then I started having an overwhelming urge to breathe down. I got out and continued walking about until the midwife advised me that the guttural ‘mooing’ noises I was making meant it was time to get into the birthing pool. It was 4am. I immediately got onto all fours and began breathing my baby down. It never occurred to me to ask for drugs, I felt very much in control and let my body tell me what I needed to do. By 4:36 I was scooping my beautiful baby girl out of the water. My timings were slightly earlier than I had thought but I was not going to complain! Jessica Scarlett was alert and calm, feeding almost immediately. Her cord was cut when it had finished pulsating and we were left alone for several hours as requested to adjust to our new roles as Mummy and Daddy. It was amazing being able to feel everything and as soon as Jessica was born I felt an enormous wave of emotions and adrenalin. Our visitors actually said I looked in better shape than my husband!

I am not an overly confident person, yet something about hypnobirthing gives you a confidence and strength you never felt possible. On the 8th November 2010 I did something amazing and hypnobirthing gave me the knowledge and tools to do that.