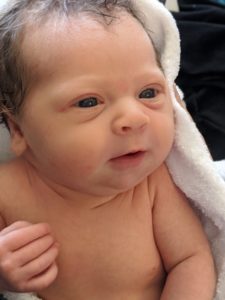 So after much waiting, we finally had our second baby at home in the pool on the morning of Friday 17th April – a little girl who we have named Violet.
We had attended a full Hypnobirthing course with Sandra due to a traumatic first birth which led to severe anxiety and fear about giving birth again. We entered our first birthing experience quite unprepared and knew we wanted to have more knowledge, skills and control over our second birth in order to have a more positive experience for both ourselves and our baby. Sandra offered such personalised support to us, and I attended some one to one sessions that were just so empowering. I practiced daily as much as possible, so when it came to the birth I genuinely felt so in control. Due to learning more about the ins and outs of birth I also felt knowledgable about the birth options we chose and confident with them, and through practicing with my partner we were on the same page so he was a fantastic and proactive birth partner.
For some days I had increased Braxton Hicks, with these increasing in intensity and frequency the day before. I couldn’t even make it to the end of the street due to being uncomfortable but didn’t think anything was starting. I went to bed as normal but woke up around 2.30 with a quite intense pain and simply knew this was it! I woke up my partner, and we called my parents to come and collect our 3 year old boy while I started running a bath. I started getting quite panicky and shaky at this point with the trepidation of what was coming, but continued with the relaxing hypnobirthing ‘4 and 8’ breathing I had been practicing for months, which really relaxed my body. I then rang the labour ward who arranged for two midwives to come.
I got in the bath while my partner prepared the living room, laying the sheets and blowing up the pool etc., and I continued breathing through the contractions and staying calm in between. By the time I got out, I was finding it difficult to walk so was helped to the sofa where I found it easiest to be on my forearms with my bum in the air! A lovely sight as the midwives arrived! We had dim amber lighting, lavender oil in the burner and some calming music playing so the environment was incredibly relaxing.
By this point the surges were coming thick and fast really, every minute or two, and I found myself groaning through them which seemed to bring relief. The majority of surges I managed to breathe through, but some I let this slide as the overwhelming pressure and need to bear down meant I got quite shouty! Once the pool was up I was helped to it to get in, and the water was unbelievably soothing and the pool was so comfortable. At this point a MW examined me and found that baby was very low down and pretty much sat there waiting. She said if I felt the need to bear down I could do so with the surges, and at this point I found it a bit overwhelming and asked for some gas and air. This wasn’t really part of our birth plan, but using it along with the down breathing I had practiced worked well for me and allowed me to bear down. This took a while as the pressure was overwhelming so I took my time and controlled it, something I would have struggled with had it not been for hypnobirthing.18 minutes later she was out! She had the cord doubled round her neck which had to be cut off, this meant my partner couldn’t cut the cord and we couldn’t have delayed cord clamping. This was disappointing but necessary, and meant she had to be taken to be revived a little bit, but the midwives were fantastic and reassuring and took amazing care of her.
I used hypnobirth breathing to deliver the placenta as well as have a couple of labial stitches due to grazes and that really helped.
The midwives stuck around for another couple of hours just monitoring us, doing paperwork and having tea and toast! They were so fantastic.
I never thought I would be giving birth in a pandemic, and I never thought I would have a baby at home but it really was the best decision we have ever made – Sandra’s support with this was invaluable. I cannot recommend hypnobirthing enough – not only did it help massively in labour but practicing throughout my pregnancy alleviated a lot of anxiety and helped me make some decisions I wouldn’t have made otherwise. I really did feel in control, strong and relaxed and loved every second. Our baby is also so content, calm and has fed amazingly since day one and I really think this is testament to such a peaceful birth and calm parents through hypnobirthing. At the start of this pregnancy I could not have imagined I would be able to achieve what I have and for that I will always be grateful We cannot thank Sandra enough for helping us to have a wonderful experience that we will always be proud of xxx