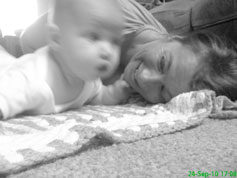 Jacob was due in medical terms, on the 6th April 2010. Having gone through the process of HypnoBirthing, I wish Id taken the attitude of “sometime in April” as 6th came and went with no sign of Jacob. Not that it bothered me. I went around doing what needed to be done. Relaxing with my hypnobirthing CD’s,  practising my breathing and talking to Jacob. Telling him it was ok for him to have extra time in there. Every day, I embraced as an extra rest day, extra time for me and my daughters to do special stuff, while others around me, got more and more agitated. I did try a few non evasive ways of kick starting things off, but he was happy where he was. Having everything ready at home for a homebirth, with the support of my midwife, Jan. We decided to do a sweep when I was 40+7 and 40+9.  He was low, his head resting against my cervix, ready but was obviously too comfortable.

At 40+10, I was told that the community midwifes would not support a home confinement after this time and if I went into spontaneous labour, I was to attend the Hull Royal because I was overdue.  My induction was booked at 40+12. Overdue my ….!!!! I politely insisted that I would like to leave the induction until 40+14, which wasn’t received very well at all. I had to go down to Hull Royal for a trace to check Jacob’s heart rate which I agreed to. After the trace, I spoke to a consultant, who insisted that I should be induced the following day and again, I politely refused. As Jacob was happy, heart rate was lovely, moving lots, I would come in on 40+14. My extensive birth plan, stated that if an induction was necessary,  I would allow them to release my waters, but then wanted to be left for the max of 6 hrs ( they usually leave you for 4) and if nothing happened then I would be willing for the hormone drip ( really didn’t want that!)  I also wanted to be as active as possible with the use of a birthing ball, walking about, adopt any position I felt comfortable in and use the birthing pool. Again I had to politely push for all this but it was written down and highly noted

I’d been having lower tummy pains n pressure in my bottom for most of Monday 19th April but put it down to feeling a bit anxious regarding the induction on Tuesday 20th. By about 9pm I noticed that I was cramping regularly so took myself off to bed to see if I could sleep. Plugged myself into my itouch and listened to both the HypnoBirthing Rainbow Relaxation and Comfort Zone, whilst practising deep breathing. Every time I felt myself cramping ( around 7-10 mins at this point) I did my surge breathing, which I found so relaxing and comforting. I stayed in bed until around 2am and then decided to get up, I was too wired! Although I was in a relaxed state and the cramping was mild, I was getting excited. I pottered about the house, sat and watched a couple of things on sky+ but at 4am Tues. morning I woke John up as I wanted some company! We both sat and watched a few bits and bobs on TV. He could tell by my surge breathing, the surges were coming 3/5 mins. apart. He asked if he needed to do any scripts with me and I said no at this point as I was relaxed and calm, so he kept giving me a few key words to encourage me on.

We arrived at Hull Royal about 6.30. After settling in and having a trace for 30 mins, all was well and they just let me get on with things. I had a male midwife, Paul and a student midwife, Julie who were popping in and out from time to time. I kept active, bouncing on a ball, swaying and with the help of my HypnoBirthing CD and breathing I felt really calm. While I was on the birthing ball, I lent forward on the bed, with my head resting on my arms doing my surge breathing and even managed to doze off between surges. John was also relaxed and calm sitting on the sofa.

At around 10.30 when I started to feel ‘pushy’. I knew my body was getting ready so I got john to get the midwife. The birthing pool was filled, and Paul asked if it was ok to check me. I said that was ok and I was about four cms.  dilated. I felt relaxed and asked if they could release my waters at 11 Funnily enough, this was the time of my induction so they would have released them if I hadn’t started naturally. I knew that it would quicken things up but I also knew with the breathing, the music and John, I would be fine. Paul released my waters and told me that I was doing really well and the gas and air was on the wall if needed. He then sat with the student midwife at the far end of the room and let us have our space.

I had been hanging over the end of the elevated end of the bed on all fours using gravity and  Jacob’s head to press on the cervix and to help me dilate. With the breathing, I imagined opening flowers, Jacobs head being born, musical notes floating up in the air. John was still standing by me, rubbing my back and messing with his phone and again asked if I needed the scripts and I said I was still coping fine. I drifted off, in and out of deep relaxation and started to use the gas and air with my surge breathing as the surges were now almost continuous.

With my first daughter, I suffered from an anterior cervical lip, which when I became pushy, didn’t move out the way and became swollen, I had discussed this with Sandra in our sessions and we did a fear release script. Although I was imagining a beautiful flowering rose, the bearing down and surges were quite intense, at the height of the surges I could feel myself bearing down because my body was telling me to. I followed my body and took over with a guttural, primal grunting.

I asked to be checked again, and was told that Jacob was almost here. The birthing pool was run but in another room and because I was so close, Paul was concerned that I might have him in the corridor! I must have really wanted a water birth as I was off the bed and leading the midwives to the room! I managed to get to the side of the pool before next surge, then got straight in, turned on all fours and started to birth breath my baby down.  Within five breaths, Jacob was crowning and I was so overwhelmed I was calling his name and saying hello all the while he was being born. I felt him rotate and Paul un looped the cord from around his neck, which was loose. I brought him up to my chest, sat back and had a cuddle and a chat with Jacob Christopher Hartley.

Jacob was born at 12.06. He cried a bit but then was really alert and looking about happily. John cut the cord after it stopped pulsating and he was wrapped up and given to John for a cuddle. I had a physiological 3rd stage in the pool and everything was great! I felt calm, relaxed and bonded immediately with Jacob.

I went to get out of the pool, got one foot on the stool on the outside, felt really sick, told Paul, who grabbed me just in time as I fainted. I woke up on the floor after what felt like a very odd dream with a roomful of people making sure I was ok. It took me about 15 mins. to be able to move without feeling dizzy, my blood pressure was really low .Again, my HynoBirthing came into its own as I was doing the calming breathing to bring my blood pressure back to normal and make sure my body was getting enough oxygen. I had a saline drip (while I had tea and toast) and they wanted to keep me in overnight just to make sure I was ok. Paul thinks the combination of losing just a bit more blood than I should have and birthing so quickly just sent me into shock but with the HynoBirthing breathing and remaining calm it stopped both John and I panicking. We were left in the birthing room until about 6.30 and I was moved to the postnatal ward. Jacob weighed a lovely 9lb 7 1/2 oz and I had a very slight graze. I had a room on my own and while Jacob was sleeping, John and I chatted and tried to get some sleep! He didn’t want to leave at 9 pm but he got kicked out and I had a reasonable night with Jacob. On Wed. morning my bloods come back and my iron was low but the staff were happy with me coming home with iron tablets. So although I didn’t get my home birth, maybe someone was looking out for me. I still got my water birth and I couldn’t have wished for a better birthing experience!

Jacob is now 13 weeks, exclusively breastfed and doing brilliantly. He has fitted into our lives like a perfect glove fits a hand, sheer, and like you never knew life before that glove and you wouldn’t know what to do with yourself if you lost it. I practised calm breathing in the early days when I had my after pains which helped a great deal! I also calm breath when I’m breastfeeding and last thing at night before I go to sleep and I still find the odd surge breathing slipping in there too!!