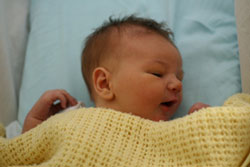 Eddie’s due date of the 18th of March came and went, however, having completed the HypnoBirthing course with Sandra, we were fairly relaxed about his due date despite constant enquiries from well-meaning friends and family. I was put under a lot of pressure from doctors at Hull Royal to be induced at +12 days; however, since I had a very healthy pregnancy and a very active baby, I decided to wait a little longer.

Eddie clearly needed a gentle push in the right direction so at +15 I went in to be induced. On the way to Hull Royal I felt a little nervous but used the breathing techniques Sandra had taught me and began to relax. I can honestly say that thanks to Sandra, this was the only time throughout my pregnancy and birth that I felt nervous. On arrival at Hull Royal I opted for the slow release prostaglandin in the hope that I could still have a natural water birth. The midwife informed us that the baby was back to back so my husband and I spent most of the day walking around the hospital grounds and I bounced on a birthing ball and listened to the HypnoBirthing scripts. I started having gentle surges soon after the prostaglandin. Hospital policy meant that my husband had to leave the inducement ward at 9p.m. but I still felt relaxed and managed to sleep.

Two hours later I started having stronger surges but stayed in bed and rested, I was still relaxed and slept a little longer. I stood up later to visit the bathroom and my waters broke, at this point I rang my husband and said ‘It’s time!’ The midwife took me up to the labour ward where my husband joined me. Unfortunately there was meconium in my waters and the midwife said that I would not be able to get in the pool but gave me a birthing ball and tried to monitor me whilst I sat on the ball. This proved impossible and I was becoming uncomfortable so sat on the bed instead. Unfortunately to further complicate matters Eddie was still back to back and his head still wasn’t fully engaged!

Eventually the midwife said that she would like to ask the doctor to examine me since Eddie was showing no signs of moving down into position. On examining me the doctor suggested we wait a while and that she would come back later. I was happy to wait and pleased that we weren’t being rushed. However, after a while the monitor showed changes to Eddies heart rate and the doctor was called back. I have to say she was brilliant and explained everything clearly. With the baby already overdue, meconium in the waters, and the possibility that Eddie was stuck, it was suggested that we try Syntocinon in the hope that this would encourage him to move down. I agreed and ended up having an epidural as the surges became much stronger. It became clear that Eddie was most definitely stuck but I insisted I really wanted to avoid a caesarean. In the end I had an assisted delivery in theatre, even then I felt confident and excited to meet my baby. On paper this may all sound a bit traumatic but I can honestly say that I enjoyed birthing my baby and even during labour I was talking about having another! The following day the doctor told me she had been convinced that I would need a caesarean and I’m sure that the HypnoBirthing course gave me the confidence and strength to push despite the complications. I really want to thank Sandra for instilling that sense of confidence in myself and my husband; Eddie’s birth was amazing and despite the complications I wouldn’t change anything about the experience. Our gorgeous baby Eddie was born on 3rd April weighing 9lbs 1.5oz.