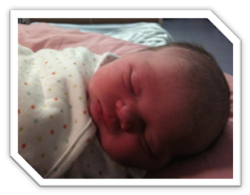 At around 37 weeks of pregnancy, I had a really peaceful sense that labour wouldn’t be too far away. I’d had several periods of regular, strong Braxton Hicks contractions that didn’t progress anywhere but led me to believe that my body was preparing for birth.

On the Wednesday, when I was 38 weeks and 3 days pregnant, my husband had to work 200 miles from home. By 4pm I was getting quite intense pains that I couldn’t talk through. I realised that I needed to get to the hospital. Dominic was still 100 miles away, so I called my Father in Law who drove me into hospital and Dom met us there.

We were checked over, and the contractions were showing strongly on the monitor. I was examined, and my cervix was found to be fully effaced, anterior but closed. The midwife, who was lovely, was able to touch the baby’s head though, which felt very strange. She didn’t think I was in labour yet, and said she thought it would be days away yet. At 9pm we made our way home.

I was very uncomfortable for most of that night, and used a TENS machine to help with the pains. By morning things had died down, but I was still getting strong Braxton Hicks. I had a feeling that this was early labour, so I hunkered down at home and got on with it. The pains were strong, but were irregular and not getting closer together.

I had an appointment with the community midwife in the afternoon, so I decided to go to that and talk to her. She felt that labour was weeks away yet. She told me of a patient who had recently had the home birth midwives out six times in the night, between 38 and 42 weeks, and felt sure I would be the same. She also said she thought the baby was at least 9lb. I went home a bit disappointed and fed up.

The next morning, Dom left for work late. As I got out of bed, I felt a funny sensation as I walked past the full length mirror on my way to the bathroom. I paused, only to actually witness my waters breaking! I saw – and instinctively caught – the bag of membranes as it broke.

Dom came home and we made our way to the hospital.  I was having weak contractions, but they weren’t developing into anything convincing. I tried listening to my HypnoBirthing CDs, and bouncing on a birth ball whilst sniffing Clary Sage, but I was struggling to concentrate to get into “the zone.” Our midwife was getting less patient as time wore on as the labour ward was very busy. The contractions started to get a bit stronger but were still irregular – at one point they were coming every 2.5 minutes – but they slowed down again the next time I was interrupted, which was happening quite often on the busy ward. The midwife asked us if we’d prefer to go home, which we were both unsure about. However, nothing much was happening and she felt that we wouldn’t progress before tomorrow, by which time I would be induced as it would be 24 hours since my waters broke. As I wasn’t progressing, I asked to be examined and was only 2cm. We decided we’d be better off at home, where we could be private and focus on the business of going into labour. I felt sure I would be induced the next day, as I was with Charlie.
At home, we packed the children off to Grandma’s and settled down to a quiet night in. It was lovely – we had a nice dinner, a glass of wine and watched some trashy TV. We had an early night, but I didn’t sleep much. I wasn’t contracting much, either.

Saturday 30th June arrived after the longest night I have ever experienced. I woke several times because I was excited, but not because I was having contractions. I awoke at 6am with period pains, but was not convinced anything was happening. We got up to wait for the hospital to phone us, and pottered about the house. We waited, and waited, and waited. I spent a lot of time bouncing on the birth ball, listening to my HypnoBirthing CDs and trying to breathe through the contractions I was having. I was absolutely unconvinced it was anything serious, having experienced similar so many times before.

At about 10.30am, Dominic phoned the ward and asked if they had any idea what time we should go in. They were very dismissive and said it could be another 72 hours! I got very frustrated at this point and cried.

11am came, and I decided a bath might get me out of the funk I was in and help with the pains. Dom ran a nice, hot bath and it was absolute bliss. I wallowed for a long time, listening to my HypnoBirthing CDs and visualising opening flowers and blue ribbons tugging my cervix upwards. I felt very dreamy and relaxed; it was really quite enjoyable. Dom was pouring warm water over my bump and timing my contractions “just in case” – I think he needed something to do. Even by 1pm, when I decided to get out of the bath, they were still irregular, although they were now quite strong. Our app shows them coming at 4 mins, then 2 mins, then 8 mins. As they were still irregular, and I didn’t need pain relief, we didn’t think about calling the hospital.

Around this time, I suddenly realised that I had started “mooing” through contractions, and this worried me. Part of me was pretty sure this meant I was in transition, although another part of me thought this was impossible, as I’d hardly had any labour pains. The HypnoBirthing wasn’t really helping at this point – probably because I had this inner warning voice telling me that things were moving quickly. I tried very hard not to moo; I couldn’t. This really set my alarm bells ringing. I decided to get out of the bath, which was a bit of a challenge – had we had a bigger bath I would probably have stayed there until delivery. Once I stood up, I realised very, very quickly that things were moving at some pace.

First of all I sat on the loo back to front, which was helpful. However, it was starting to seriously hurt. I realised that things were moving very quickly and asked Dom to call the labour ward for advice. I could hear him on the phone, and I couldn’t stop the low, moaning noises I was making to get through the now very strong contractions. It was clear to them I was in advanced labour, so they sent both an ambulance and the community midwives. I started to panic and found it difficult to focus on my hypnobirthing techniques as I was suddenly in very strong labour. To manage the pain, I tried standing up holding onto the bed frame. I was feeling quite scared and I didn’t feel in control anymore. Eventually I got onto all fours, hanging over the side of the bed. I can’t remember much about this stage, except Dom hugging me and telling me he could hear the sirens coming.

It was in this most refined of positions that the ambulance men first saw me. By this point I had decided to only way to deal with the situation was to bury my head in the duvet and not look at them. They silently handed me some gas and air and from this point I didn’t care what the hell they did. Damn, that is bloody good stuff! And these blokes were lovely. Amazing.

After a few breaths of gas and air things were looking up. The ambulance men were really down to earth and decisive, which put both Dom and I at ease. The Labour Ward hadn’t managed to get hold of the midwives, so it was decided I would be taken in to hospital. It was 1.20pm.

Given the gas and air, the ambulance ride was really rather fun. We whooshed through the local village at 70mph, the sirens and lights starting the moment I started groaning loudly with the next contraction. I fear I may have made a fool of myself at this time; I blame the gas and air. I prefer not to think too hard about this experience, lest I remember something else humiliating. Suffice to say that the contractions were very strong, but in between times I was at my best, most charming, drunken self.

We arrived at the hospital at 1.55pm – it was a good job that we’d not attempted to drive as the roads were very busy and lots of cars didn’t even get out of the way for the ambulance. They also jumped all the red lights and cut up the roundabouts, etc. We just would not have made it.

I was having a contraction as they whizzed me through the coffee shop area, which I am not sure was very dignified (I vaguely remember people standing up to see what was causing the commotion). I went up in the lift, and was shown straight into a set up room, with two LOVELY midwives that we’d met before. I was helped off the trolley and, as soon as I stood up, I had a massive contraction which turned into an overwhelming urge to push; a real expulsion reflex. I have given birth twice before and I have never felt anything like this. In a flash the midwives had pulled in a rubber beanbag and positioned it between my legs with a dent for the baby to land in. They heightened the bed so I could rest my elbows on it. In another surreal moment, I was facing a massive picture window overlooking the car park. I heaved three, massive pushes, whilst at the same time watching what was going on in the car park – and my baby was born.  The head came out in two pushes, and her body was delivered in the third.

I was kind of in shock afterwards, I think. Everyone was behind me and busy, and I daren’t look round. I took a few breaths thanking God that everything was over and we were safe, whilst calmly watching the car park, and I could hear the baby crying and that Dom was cutting her cord. In the hubbub of the birth there hadn’t been time to see that I wanted a natural third stage and, to be honest, it was the last thing on my mind. I didn’t mind though.

Suddenly they placed my baby girl on the bed right in front of me. She was covered from head to toe in vernix, and looked like a little alabaster baby, totally perfect, with these big, dark eyes. She looked at me and I looked at her. She didn’t cry. Everyone else did. It was amazing. She was born at 2pm on the dot. Labour was officially recorded as 40 minutes, four minutes after we arrived at the hospital.

Despite the birth not being what I was expecting, it was a very positive experience. The HypnoBirthing techniques helped the first stages of labour be very calm and relaxed and pain free. Had I been able to stay at home in water, then I am sure that the HypnoBirthing techniques would have helped me for longer. We had planned a home water birth, but medical complications in late pregnancy meant that a home birth was inadvisable, hence the dash to hospital