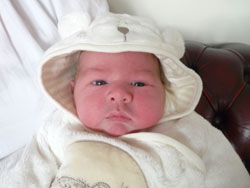 My due date was 22nd October 2011 and because I had had a previous caesarean the obstetrician informed me that I would not be allowed to go much over my due date. I was told that if baby hadn’t arrived by the 29th they would induce me by using a Foley catheter. I had never heard of this procedure, nor had my midwife or Sandra. A close friend of mine who is a senior midwife asked an OB and found out it was a technique that was used in the 1930s !! I really didn’t like the sound of it and the research that Sandra found showed that it wouldn’t reduce the chance of a second caesarean. No, that wasn’t for me so I declined the offer.

I negotiated some extra days to see if baby made an appearance but he was far too comfy in there. When I was 12 days over my due date I went in to be induced, with my new confidence and knowledge I asked for the lowest dose of prostaglandin in a peccary form wanting my labour to start as slowly and gently as possible. As they thought it would take a while for anything to happen they suggested I went for a walk downstairs to the café for a coffee. I had another idea, after all it was nearly Christmas so we decided to pop to Tesco’s for some Christmas shopping and go to their café. I don’t think they were very impressed when we returned !!  I felt fine and I started listening to my birth affirmation and relaxation CD and started to relax.

I can safely say I was not frightened but ready for my baby to arrive now. I focused and I have to say I concentrated on the breathing techniques I had learned and they worked well. My labour progressed very fast, enough to panic staff as I wasn’t even on the delivery ward. My labour lasted four hours and 12 minutes so staff tell me. I never spoke to anyone during my labour apart from my husband and that was to only request water. I felt deeply relaxed and worked my way calmly through the contractions.

One thing no one knew was that my son was to be born weighing 10lb 7oz. I had no intervention apart from a few puffs on the gas and air. The doctors came to see me and each one said something like ‘Good girl well done’ when they looked down their notes at saw my sons weight and how I had only had gas and air at the end.

I would never have had my son so quickly and naturally if it wasn’t for Sandra. The midwife was very surprised after my son was born and she kept saying in her words you did ‘amazing’. I had the cord clamped on my chest and he was weighed a few hours later. I can say that my son breast feeds brilliantly and took to it quicker than my daughter.

On the whole I am not good with pain and when I first met Sandra I told her ‘I don’t like pain I’m no good even with a leg wax’.