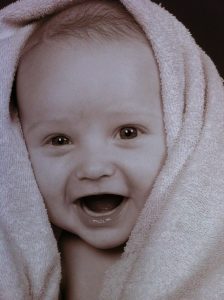 On the first of October 2012 I woke at 5:30am suddenly thinking I had wet myself! I then realised the whole bed was wet and woke my husband Scott. After some debating over whether it could actually be my waters we rang the hospital who told us not to panic but to get in as soon as possible as I was prone to infection if it was my waters that had broken.

It was strange looking back because it was all very calm and jovial. I was all ready to get up an hour later as normal and go to work as I wasn’t due for another 6 weeks nearly. I had only packed my hospital bag that weekend! I think both of us thought we were going to hospital but would be back later that day as it didn’t feel like I was in labour.

We arrived at the hospital about 6:30am and the midwife had the awful job of sniffing my sanitary towel to confirm that it was in fact my waters that had broken. I had no other sign that I was going into labour so I was monitored and sat chatting to Scott for an hour. We had a doctor come in at one point who looked like she had just got out of bed, she checked my tummy and said babies head was still not engaged! After questioning her she said she couldn’t actually tell if it was babies head or bum, just as Scott was about to get mad another doctor came, checked me and confirmed baby was definitely engaged! We told the midwife we were doing HypnoBirthing and she was really interested asking us both about it. Unfortunately the cd player didn’t work and they didn’t have any spare so I couldn’t listen to my cds but as I genuinely didn’t think I was in labour I felt relaxed and didn’t need them at the time. I was taken to a different ward around 9am as I had no surges or tightening’s. The doctors told me I could go into labour over the next two days and they were going to keep me in overnight. If labour didn’t come on I would have to have blood tests and be checked each day until I went into labour.

I felt very calm and Scott even left to pop into work. I really felt like I couldn’t be in labour as I had no tightening’s, nothing different to any other day. I read my book for a couple of hours and was given a steroid injection to help baby’s lungs with it still being 6 weeks until my due date. I ordered lunch and ate about 11:30. I had just finished when I felt the first tightening’s right across the top of my tummy under my ribs. It was short and sharp and went as quickly as it came, I genuinely thought nothing of it until I got another a bit later. I decided if I got another one, to see how long it took so I timed it on my phone, I got another one in the same place 10mins later.

I put my book down and lay down to concentrate on my breathing, really deep, 10 sec breaths expanding my whole stomach. I kept an eye on the timings as I found it gave me something to focus on along with my deep breathing. After 40/50 minutes of consistent tightening’s I mentioned it to the nurse, I also rang Scott to see when he would be back he had just arrived in the car park! By the time the nurse came back 30minutes later Scott and I told her I was having the tightening’s and they were every 6 minutes now. I was talking normally and just lying calmly breathing between each one. The nurse seemed surprised and got someone to take me back up to the delivery ward. I remembered

Sandra saying that it was best to walk around so I refused the wheelchair and Scott helped me to the lift with the nurse. At this point waiting for the lift Scott and I were still saying to each other ‘so is this it, am I actually in labour?’

We were shown into my room and the doctor came in and asked if it would be ok to examine me. By this time it was about 2pm and I was getting surges every 4minutes which were becoming stronger and lasting about 1minute each. I agreed to be examined to see what the doctor said and, I think to confirm in my mind that this was actually it, the doctor did confirm it, I was in active labour and between 4 to 5cm! I hadn’t had chance to write my birth plan fully but I knew I wanted as little intervention as possible. We told the midwives this and reminded them about the HypnoBirthing we had done and Scott spoke to her about not mentioning pain or suggesting any pain relief. The two midwives were great and were very encouraging at all times saying how well I was doing naturally and telling me to listen to and do what my body was telling me. They made positive suggestions about positions to try and kept saying how amazed they were at how calm and controlled I was with my breathing. In between surges I chatted to Scott and the midwives and as soon as I felt a surge coming I focused on my breathing and counted in my head. I knew each surge lasted about a minute so I knew that if I did 3 of my 20second breaths it would be done. I lay on my side for a lot of the time as this is how I felt most comfy. I lost track of time as it seemed to pass so quickly. Around 3:30/4pm the surges seemed relentless and I switched position to all fours with my arms resting on the top of the bed. I still hadn’t had any ‘pain’ relief, I got to the point where I remember them saying baby might start getting tired so I needed to start trying to move baby down with my breathing. At this point one midwife asked if I would like to try a bit of gas and air to help calm the baby, I took one mouthful and was instantly sick. In that moment being sick, having a strong surge and having a massive urge to poo I had my ‘I can’t do this moment!. I know looking back I was probably experiencing the transitional period that Sandra had spoken about. Scott was great and encouraged me, I kept my breathing going all the time thinking of trying to open up my abdominals and breathe baby down. I had a massive sensation to poo and the midwives said they could see babies head, Scott had a look and said you could see lots of hair but then baby kept moving back up. I felt frustrated when they kept saying you’re nearly there but I think I was just really tired at this point, I remember saying you said that half an hour ago! At the very end I admit I did give some good old pushes instead of just breathing but at 4:40pm Jake Charlie James was born weighing 5lb 12 & 1/2 oz.

The midwives were fantastic they did all we asked them to, they put Jake straight onto my chest for skin to skin. They left the cord to drain completely before asking Scott to cut it, they then passed Jake to Scott for some skin to skin time while I was cleaned up a little. Jake had to be taken up to the special care unit and Scott went with him but I felt so delighted that I had been able to have that special bonding time with him.

Jake spent 5 days on the special care unit, he was perfect but just needed help with feeding so had a tube into his tummy for feeding. We both left hospital after 9 days and Jakes tube came out after 4 weeks.

After feeling so nervous my experience of labour was ok! Apart from my ‘I can’t do this’ moment I honestly felt in control and calm. It seemed to happen so quickly from start to finish, not knowing if I was even in labour to holding Jake in my arms!

Jake is nearly 10 months old now, it has taken a while for me to write this – Sorry Sandra, you were right when you said you just won’t have time once baby is here!! I am the worst person with pain; I have a very low threshold, which is why I decided to do HynoBirthing. I am so glad I did it as it really gave me something to focus on, using the breathing techniques. The course opened my eyes and it helped me understand my body and understand logically why HypnoBirthing works. I would definitely recommend HypnoBirthing and Sandra to other expectant mothers.