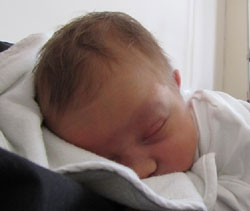 I was very happy that HypnoBirthing had given me the tools to have a marvellous, calm and relaxed first pregnancy but what would happen on the day?

Four days after my official due date, at about 11am, I started to have mild twinges every ten minutes or so but was convinced they would just peter out so just kept leaning over the sofa as they passed. After half an hour I decided to get into the bath and listen to the Affirmations and the Rainbow Relaxation CD, expecting the surges to stop once in the water. Kevin lit some candles and left me to relax and breathe.

I eventually got out of the bath and started doing the deep, surge breathing although this was quite difficult to get the whole long deep breath in during the quick surge! Kevin decided that things were happening (I was convinced everything might stop at any moment) so he called my sister to come over and look after our dogs and my Mum arrived at about 1.30pm. Kevin, Mum and I had done the course with Sandra so we all felt well prepared. I continued to listen to the Peace Sanctuary CD and managed the surges by standing and swaying during each one. I tried to eat and drink between surges but they were starting to become quite close together and at about 4pm I actually threw up which is when I finally realised that this was actually happening and perhaps we ought to start timing things in order to call the hospital!

So, at 5.30pm with the surges every minute and a half (!) and after chatting calmly to my sister and giving her a big hug we got into the car to make the short trip to the Women’s and Children’s Hospital. We were shown our lovely room and settled in (although the first midwife we met was quite dismissive that I was in active labour!). We handed over our birth preference sheet, Mum stuck our HypnoBirthing sign on the door and Kevin put on the Rainbow Relaxation CD. I really wanted to get back in the bath as the pool wasn’t quite ready for us. I was calm between surges and could breathe but was making a soothing ‘Ahhhhhh’ sound during the surges which made it a little difficult to do the slow breathing, but at least my jaw was limp and loose!

I wanted to get out of the bath and the lovely midwives (including a student who stayed several hours beyond the end of her shift to observe her first ‘natural birth’) wanted to examine me prior to making the pool ready. This was the first time they had suggested any intervention (apart from the baby’s heart rate and my blood pressure checks) but once I was out of the water and tried to lie on the bed the surges were really strong and I couldn’t get into a comfy position unless I was on my side, so I never did find out how dilated I was! Apparently it was clear to everyone that things were progressing (I was told my waters released in this position but I didn’t really register any of this!) and as I moved to a more upright position I saw the time on the clock behind the bed head was 7.50pm. The midwives said that they could get the pool ready for 8.30pm but I was in another dreamy place and my Mum, Kevin (and probably me) decided that I would just stay kneeling up, leaning over the back of the bed for now. The Rainbow Relaxation and Birth Affirmations were still playing in the background and the lighting was dim and relaxing and I recall thinking that each surge really was bringing me closer to my baby! I was now making some very loud open mouthed sounds during the surges and my birth companions were supporting me, with Mum on the left and Kevin on the right. There was a bit of joking about their height differences!

I suddenly got very hot and was glad of the ice bottles and flannels I had brought as the surges were now becoming more strenuous, like hard exercise, but still I didn’t feel any pain. I reached down and was disappointed when I couldn’t feel anything and announced to everyone ‘Nothing’s happening!’ to which my Mum reassured me that it really was, and during the next surge or so I could feel the baby’s head pressing down. Everyone was getting excited and looking and saying there was lots of hair! I felt a slight stinging sensation at the front (the massage had worked!) but my companions told me to breathe her out slowly and make ‘Ho, ho’ sounds and I pressed the area with my hand and said, ‘Be born!’whilst the head was slowly arriving.

I had a very nice, chilled out pause after this and then after a couple more surges the rest of the baby was born. The midwife helped Kevin collect her and he passed little Freya up to me at 9.10pm, weighing 7lb 3oz.

Amazing! It was a totally euphoric moment! I kept grinning and saying, ‘I did it! I did it!’. I had no tears, no stitches and no pain relief and I don’t think Mum and Kevin were worried about me coping at any time. They were the most brilliant birth companions! Not even a retained placenta could dampen my spirits as I was still exhilarated about my birthing experience two hours later! When I got back to the delivery room Kevin and Mum had been enjoying lots of cuddles and we were allowed to stay there together as a family, still elated at the wonderful main event of baby Freya’s birth!
Baby Freya was born on 9/7/12

When my daughter asked me to be one of her birth companions, I was flattered but anxious that I would be in the way and possibly distressed by seeing her in pain. I needn’t have worried on either account after doing the HypnoBirthing course with Sandra. We learned so much which empowered all three of us, so that Jenny and Kevin had the birth they wanted and Freya arrived in the world a very chilled out baby. Kevin and I had practical things to do in supporting Jenny through the birth and I really did not see her in pain. I saw her completely relaxed and then letting her body work to bring my granddaughter into the world with no interventions, pain relief or stitches. Sandra had informed us and prepared us to meet any circumstances calmly, so even a trip to theatre
after the birth did not detract from Jenny’s glowing moment of triumph. She really did say “I did it, I did it!”in a delighted way.
Thank you
Sandra from a proud Granny.
—
Eleanor Marsden