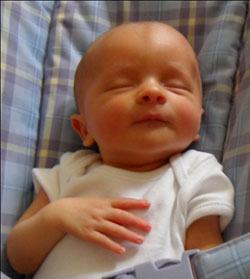 After suffering from ME for five year and having fallen pregnant, I decided that I wanted to give myself and my baby the best possible start in this world, so I underwent a lot of research in to what the possible outcome would be to my health depending on the type of birth I had. I found that in a high percentage of cases if the birth was long and complicated the likelihood of a relapse was highly likely.  If however I was to have an easy and relaxed birth the outcome could be extremely positive.

I was determined that and easy birth was the one for me.

My research led me to hypno-birthing and after speaking with Sandra, the practitioner and reading up on all the information that I could find, I knew this was the path for me.

I didn’t have the best of pregnancies; suffering from morning sickness twenty four hours a day for eight months, reflux, very low blood count, fainting spells and sheer exhaustion, I was then told at twenty four weeks that my baby was breech.

I tried in vain for the next fourteen weeks to turn the baby, but at a thirty six week appointment it was confirmed that the baby was still breech and would be delivered by c-section. To me this news was a double edged sword, as on one hand I had had enough of the pregnancy but on the other I wanted a natural birth.

At thirty eight weeks I was admitted to hospital shortly after 12noon with severe preeclampsia and was told that I needed an emergency caesarean. A few hours later around two thirty, I was in the ward waiting to go in to theatre to meet my baby. I remained calm, upbeat and happy. During the course of the afternoon nurses, obstetricians, doctors and anaesthetists came and went all the while telling me I was next. One emergency delivery after another kept cropping up, meaning I was still waiting. At approximately 22:30 (10 hours of waiting) my other half was told to go home as I would not go down for surgery until the next morning. I was still smiling.
At four o’clock the next morning my waters released and I went in to labour. My other half was called and told to get back in to hospital as our baby was on the way.

With the ladies either side of me in the labour ward screaming in agony and begging for help I was so glad I had gone to hypno-birthing. My labour was advancing and I was staying as calm and happy as I had been the day before. The breathing techniques that I had been taught in my hypno-birthing classes were working with great effect.

Two hours later the obstetrician came to see me to check how advanced the labour was, whilst speaking to me I kept  going quiet as I was using hypno-birthing with my contraction. He enquired if I was ok to which I told him when I went quiet I was having a contraction, he looked at me in astonishment and asked how often were my contractions coming, when I said every two minutes he looked in amazement and five minutes later I was in theatre having a caesarean.

Until the anaesthetist put the epidural needle in my spine, I was calm and excited and then it all changed. The drugs took affect and my teeth started chattering, my hands and body started shaking this is normal apparently but I found it quite unnerving. I was pretty scared and didn’t like what was happening to my body. The baby was stuck and the obstetrician explained that he would have to put his hands right under my ribs inside my body and he said the words “this is going to hurt” and believe me it did!

The next few hours were horrible. The drugs took a few hours to wear off and I was scared to hold my beautiful baby boy because I could not stop shaking. I could not feel my legs, which is the strangest feeling and all I wanted was the effects of the drugs to disappear.

In summary there were definite benefits from attending the hypno-birthing course.  Pre epidural I felt in control and calm even though my expectations of when I was going into theatre were being changed frequently.  It didn’t faze me.

Due to the drugs of the epidural I felt less in control and this is an unnerving feeling having being in control for so long.

I would highly recommend hypno-birthing for the positive approach it takes to pregnancy, it’s also informative and it brought my partner and me closer together during what was a unique experience to us both. If I was to do it all again, I would do everything humanly possible to have a natural birth, because my personal experience of caesarean is that the element of control of the situation is lost. As discussed earlier I experienced contractions and although uncomfortable (like bad period pains) you still maintain control and have the power to have the birth you want.