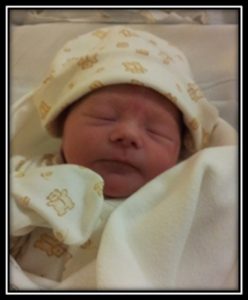 After months of trying to conceive and having no look, I decided to meet Sandra to do a course of Hypnotherapy to see if it would help us along our journey. My partner, Kev and I had both had the medical tests to see if there were any problems, which there wasn’t so Sandra focused on me with the sessions.

I learned a lot straight away and realised all of my anxiety and worry wasn’t helping us at all and Sandra taught me how to become more relaxed and positive thinking. I came away with a wealth of knowledge and put it into practice by changing my diet, taking supplements, listening to relaxation cd’s and generally stopped dwelling on the situation.

In the meantime, friends and family started to announce pregnancies which were hard but with Sandra’s help, I was able to deal with it differently to how I had previously.

Throughout the 8 sessions I had with Sandra, three of the weeks when I arrived I told Sandra of new pregnancies which we thought would have been a setback, but strangely I coped very well with each bit of news. I’m sure anyone who is reading this will understand how you feel when you’re trying to conceive with no success and people around you are announcing their happy news, you’re over the moon for them but can’t help feeling upset inside like a kick in the stomach.

However, with Sandra’s help, my attitude completely changed and I started to feel a lot better about our situation, and the best news EVER was that by my 8th and last session I had my own amazing news to tell Sandra about……I was pregnant!

With the success so far, there was no way I was not completing the actual HypnoBirthing course, so about 5 months later, here we were again back at Sandra’s with Kev, carrying out the course.

And now my birthing story begins……..

It was the morning of the 13th December 2012 at 4.30am and I was laid in bed when all of a sudden a loud “pop” sound happened and my waters broke. It was 2.5 weeks before my due date so even though early, I wasn’t overly concerned. I contacted the hospital to advise them but because I couldn’t feel anything at the time I was told to call again later in the morning and come in for an examination but if my labour progressed to just continue as normal.

It was now 5.45am and Kev had run a bath for me, I managed to stay in the bath for about an hour trying to relax but couldn’t seem to get comfortable so decided to get out. I spent most of the time in the bathroom leaning over the toilet and then the side of the bath. At this point I started to panic a little because all of the relaxation techniques we had practised didn’t seem to be working and I even said to Kev, “if this is only early stages of labour….then I don’t think I can do it and our HypnoBirthing practice isn’t working”. I must add here though that this is the only one time throughout the birth that a negative word came out of my mouth and I had a bit of a blip shall we say.

All this time whilst I was trying to remain calm and doing my breathing exercises, Kev was doing a pack lunch and having his breakfast and getting everything ready. Fortunately I had finished packing the baby bag the previous night before we went to bed.

It was now 8am and I said to Kev we need to go to hospital now!

It was 8.30am when we arrived at hospital, I managed to walk to the labour ward and declined a wheel chair because all I was thinking was Sandra saying keep upright and moving.  It was a bit chaotic when we were settling in our birthing room because we hadn’t rang ahead again to say we were coming and they didn’t have our notes but that soon settled and I gave our midwife our birthing plan and straight away our requests were carried out.

Up until now, things didn’t seem to be going as planned but once I settled in our room, it was like someone had flicked a switch. The lights were turned off for us, our CD’s were put on, the staff were all made aware that we were doing HynoBirthing and everyone went quiet and calm.

I wasn’t able to have a water birth because I had high blood pressure so this also meant I had to have monitors on me constantly but this didn’t affect my HynoBirthing.

Our midwife asked if it was ok to carry out an internal examination, which I agreed to and at this point I was 8.5cms. I was amazed that I had got this far. Now everything was in process we were left on our own for a while.

Kev made sure the cd’s didn’t stop and sat by the bed holding my hand. It was wonderful that I had finally got to this calm, peaceful stage to progress with the rest of our birth. The midwife hardly spoke to me, I was just silent throughout focusing on my breathing, we both even fell asleep for a few moments which the midwife was astonished by!

After another examination when I was fully dilated my surges had started to slow down and they realised the baby’s head (Isaac) was turned sideways so they put me on the hormone drip to get them back up again and to try and get Isaac to turn. I was left for another hour or so, calm and completely relaxed and silent on the bed listening to my cd’s and breathing. I was in my own world and was a lovely feeling being in such control.

I was checked again after another hour, originally this was supposed to have been to see if I could continue on the drip for another hour but then they realised Isaacs heart rate had dropped and had been for a while so they decided they had to get him out and quickly.

It was explained to me that I needed forceps assistance and then all of a sudden there were a lot of people in the room and all I kept hearing was the medical staff asking if I’d had “pain” relief. I hadn’t had anything so it was explained that they would cut me so they could get the forceps in and that I would need a numbing injection.

We both still managed to stay calm with all this going on and Kev reassured me, although I didn’t need the reassurance, I was zoned out as though oblivious to everything going on around me.

After a couple of pushes and the assistance from the doctor Isaac was born. I mainly got the birthing experience that I had hoped for except from the last part when it went at bit hectic and Kev wasn’t able to cut the cord. I briefly held Isaac on me straight after his birth but then they had to take him to check he was ok as he was a bit startled but thankfully he was fine and well and brought back to me where I held him closely on my chest and did skin to skin contact and he even latched onto the breast himself and started feeding.

The whole experience was amazing and brilliant, I was so proud of myself and so was Kev and it was so empowering to hear all the medical staff saying how they couldn’t believe how I’d done it, in silence, controlled and no “pain” relief. I say “pain” relief as that is what everyone always says, but I wouldn’t describe anything like pain, just a strong feeling of pressure.

Afterwards we spoke to our midwife about Isaacs’s birth and how she felt throughout and it was interesting as she had never been involved in HypnoBirthing before, only heard about it. She couldn’t make her mind up whether she liked it or not because she said she couldn’t read me to see where I was at as I wasn’t doing anything. Normally they can tell by the noise people make etc and when they are birthing a baby when a mother has had an epidural, they lead her anyway. But all I can say to that is, that was what we were aiming for….to have a natural birth, led by my own body and my instincts.  Unfortunately we had to have intervention towards the end, but Isaacs’s safety then became my priority but at least I came away from hospital feeling happy, blessed, and positive about birthing with our perfect bundle of joy – Isaac Benjamin Jack Short, born 13.12.2012 6Ibs 8oz

I would not hesitate to recommend HypnoBirthing to anyone and will certainly be going back to see Sandra again in the future.