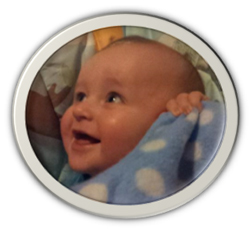 So it was Wednesday October 3rd ‘m 40 + 8 with not a single sign, the hospital was trying to push me for an induction within the next 5 days so my midwife came to do a sweep as she knew how much I wanted a homebirth. to my surprise I was 3-4cm and she stretched me to 4cm, she told me I had to go into labour Thursday night or Friday morning because that way she would be there to deliver my baby instead of some stranger but after the sweep she hinted that the person on call that night might be doing the delivering. I had back ache all day/night, hardly slept and when I did finally go to sleep and I woke up to not a single niggle.

So Thursday I had no niggles, no signs, no back ache. My midwife Andrea was coming in morning to do another sweep and I thought I was going to have to have words with her for getting my hopes up. That night I couldn’t sleep and at 2.30 am got my first wave of back ache I then started to get worried as I was having some complications along with backache so called labour ward who said have a bath an to call back if I had no improvement in an hour.

At 3 I noticed the back and thigh pain was coming in waves so woke Alex up and said I think its time he turned back over and started snoring again. I timed them but they were all over the place varying from 4-7 minutes apart and 30-45 seconds long. I just thought it was probably going to be my body preparing and tried to ignore them. I thought lets have a clary sage bath that might help so I relaxed in the bath for a good hour, when all of a sudden my body said I cant cope and something told me to ring the labour ward, the back and thigh pain wasn’t that bad, just like leg cramp and back ache and I was coping with them as they was so far apart and not that long and not painful this is the first time I thought it could well be labour but very, very early stages and thought I was just panicking. I  Got Alex up start getting the living room prepped for my pool so I could get in, I stayed in the bath until Andrea came. When she came the pool was inflated but since I thought I was probably not even in labour we didn’t fill it up. she did all the checks and said  “well that pool wont be filled in time you are fully dilated but you still have a cervical lip so we will say 9cm” She did my blood pressure and found it to be extremely high. Andrea said if it doesn’t go down that she would have to send me to hospital she rang them to see what another midwifes opinion was on it as she thought if I transferred I would end up giving birth on the way, I then used my breathing techniques and a technique Sandra had shown us to reduce high blood pressure, I managed to imagine going into my body’s control panel and using a dial to lower my blood pressure. I got Alex to take my daughter to my mums which is luckily down the same street, he came back and Andrea re did my blood pressure it had gone down and was fine. For an hour we sat chatting even laughing and watching the t.v. Surges were still 5-7 minutes apart and lasting no longer than 30-40 seconds, it was all in my back and legs so during surges I got a lovely back massage from Alex. Andrea noticed that baby wasn’t descending properly and told me to do little pushes he still didn’t descend. Andrea finally decided I needed to be helped with this cervical lip as this is the reason I wasn’t progressing it was stopping baby from going any further down the birth canal and he was stuck, she was trying to move the cervical lip behind baby heads (only time I made noise as it was very uncomfortable) and she the noticed baby’s head was tilted it took a while for baby to descend go past the cervical lip due to his head position and after some j breathes out came the rest of him, I felt amazing, we named him Leo Riley he is such a content baby, that hardly ever cries and I even had to wake him up for feeds. He weighed 8lbs 3oz and is beautiful.