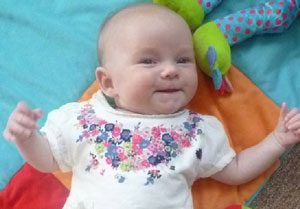 My husband and I become pregnant through the process of IVF and had been given a ‘due date’ of 15th February.  Baby and I were monitored closely throughout my pregnancy, mainly due to my incessant worrying!!

As we were having a baby through IVF we were told by our consultant that we would not be able to go past our ‘due date’ by more than a week and that I would be induced at 41 weeks.  I was desperate not to let that happen as I wanted as natural a labour as possible and couldn’t stand the thought of having to stay in bed with monitors and drips attached to me.

I was examined a week before our ‘due date’ and a midwife told me that she would be very surprised if I went over that date so I left her feeling very hopeful that our baby would be arriving soon.  The 15th February finally arrived, but no sign of our baby, I was booked in for a stretch and sweep the next day to try and get things moving.  I was told that everything was as it should be but that if my body wasn’t ready then the stretch and sweep may not do anything to help.  We spent the afternoon and evening waiting to see if anything would happen and woke the next morning slightly disappointed that we were still at home and not in the hospital with our little bundle of joy!  My husband was going to be my birth partner with my Mum as stand in, in case it was a long process or Mike needed any support.  My Mum and Dad live in Scotland so were on standby waiting for the phone call to ask them to come down to Hull.

The next day I went out for lunch with family but did not feel hungry.  I started to have an uncomfortable feeling low down in my pelvis but just put it down to the stretch and sweep the day before.  I spent the afternoon shopping and began to feel more uncomfortable although I thought it was more like IBS, which I do suffer from sometimes.  I came home and decided to listen to my hypnobirthing CD on the sofa and fell asleep for an hour.  I tried bouncing on my birthing ball but that was not very comfortable.  At 5.30pm I walked up to my doctor’s surgery to pick up a prescription for my husband.  I walked slowly as I felt very heavy and uncomfortable.  I actually asked the receptionist if there was a doctor around to check with him if this was normal but they had all finished for the evening.  Once I got home I noticed a slight bloody show in the toilet, I decided to have a bath to try and help me to relax.  When my husband came in from work he rang the Maternity ward and they asked me to come in just to check all was well as I had mentioned a slight bleeding.  We packed my bags and pillow into the car just in case I was kept in although I was pretty sure it wasn’t labour.

At around 7pm the midwife at the hospital checked our baby’s heart beat and asked me to explain what I was feeling.  I was still only having an uncomfortable feeling low down in my pelvis every now and then.  She told me I wasn’t in labour and that I would know when I was as the feeling would start at the top of my uterus and move down.  She explained that the feeling I had just now was just the baby’s head pressing down and getting into position.  She didn’t give me an internal examination.  We came home feeling a bit deflated as we had hoped that this would be the beginning of the labour.

As the evening wore on the feeling started to become more intense.  At about 9pm Mike rang the hospital again and the midwife asked to talk to me.  She told me it probably wasn’t labour and just to take a paracetamol and have a warm bath to ease any discomfort I was having.  I went for a bath putting my hypnobirthing CD on repeat and managed to relax and take control of myself.

I decided to try and go to bed and sleep just in case anything was to happen in the night.  Getting out the bath was a bit of a struggle and I began to feel very shaky and unable to control it.  Mike had to come and help me to get dry and I got into bed with my relaxation CD still on repeat!!

I asked Mike to try the light touch massage but the feeling I was getting became so intense and frequent that I began to panic slightly.  Mike rang the hospital yet again at about 10.30pm and we were told again that I probably wasn’t in labour but that if it was then it would be painful and it would be better to stay at home for as long as I could!  Not really what I wanted to hear!!  Mike explained to the midwife that I was shaking uncontrollably and she told him to give me something to eat as it may just be low blood sugar as I hadn’t eaten much that day.

I managed to get myself up to the toilet as I really felt like I needed to poo.  I didn’t dare get off the toilet then as the waves kept coming and coming.  Mike was trying to make me eat a cereal bar at the same time which wasn’t going down very well!!  I could not get comfortable and was beginning to think that something was wrong with me or the baby as we kept being told I wasn’t in labour so it made me wonder what on earth was actually happening to me!!

I eventually got myself onto all fours on the landing and suddenly told Mike that I felt the need to push.  Even then I was still convinced I wasn’t in labour and that I was just being over dramatic as the midwives had kept telling me I wasn’t in labour.  At this point Mike rang the labour ward and told them he was bringing me in.  He had to help get me dressed. I managed to get into the car between surges and Mike rushed me to Hull Women and Children’s Hospital.  I fought back the need to push as we drove.

As soon as I stepped foot out of the car my waters broke.  I had Sandra’s voice in my head saying that it is best to stay active if you are in labour so opted for the stairs instead of the lift to get up to the labour ward!!  I had to keep pausing as each surge came.

We made it to the delivery ward and the midwife there showed me to a room and said lets have a look and see where this baby is.  She then told us that our baby was on her way now!!  We couldn’t believe it!  I was so convinced they were going to send us away again, we hadn’t even brought our bags, camera or birth plan in with us!  I asked if I could have the birthing pool but was told it wasn’t available.  I explained that I was doing hypnobirthing but then didn’t really have time to say anymore.  I didn’t realise how quickly the next part of the labour actually happened.  Once I was told that our baby would be here soon and I knew that I was actually in labour I felt so much more relaxed, there wasn’t anything wrong after all!!  Mike kept telling me how proud he was of me and how well I had done.

The last stage of labour was very quick and my body just seemed to take over.  I got myself over the back of the bed and just went with each surge.  I didn’t even consider asking for gas and air or any drugs and wouldn’t describe that part of the labour as painful.  It was just a natural urge.  The midwife asked me if I could feel a stinging sensation which was when the head first started to crown.  Mike and I were able to feel our precious little girl’s hair just before she arrived into the world.  She gave a little squeak as she was born and as soon as I held her to me she stopped and looked around wide eyed taking everything in.  She was so alert and her eyes were so big, searching out our faces.  I remembered to ask the midwife to wait until the cord and stopped pulsating before Mike cut it and we then were able to take it in turns to hold our baby close to us skin to skin.  The midwife helped her to latch on and she started feeding straight away.

I then had the exciting moment of ringing my Mum and saying ‘Guess what?  I’ve had a baby!’  It was the best phone call I have ever made!!  She was ecstatic although a little sad to have missed baby’s arrival.  Our quick delivery had saved anyone worrying as we didn’t even have time to ring anyone to let them know we were going into hospital!!

We arrived at the hospital at 11.50pm and Jessica Eva was born at 12.28am.  I did have a few stitches but I think that was due to the fact that Jessica was in such a rush to come out, she came all at once not the head then shoulders as often happens.

I would not say I had a pain free labour but it was nothing like the experience I was fearing and dreading before I met Sandra and took part in the hypnobirthing course.  Neither would I describe the experience as painful, it was more uncomfortable than anything else and I believe the reason it became more uncomfortable was because I began to panic and become tense when we kept being told it was not labour as it made me think something was wrong.  I will know for next time!!

I love telling people my birth story and seeing the look of shock on their faces when I say it was easy.  Everybody expects to be told the usual horror story!  I would like to say a huge thank you to Sandra for all her support and being there for me through all my concerns and worries.  She enabled me to look forward to my labour and gave me the confidence to believe that I could do it naturally.  I can proudly say I was able to bring our precious little girl into the world without even a sniff of gas and air!!  I just can’t wait to do it all over again!!