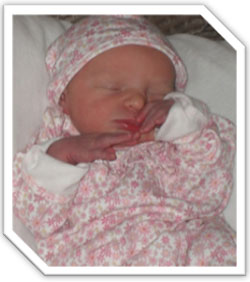 After the course we waited patiently for the birth of our baby. As the time passed we both got more excited, wondering whether we would get a little girl or a little boy. I had been booked to have our baby in the Jubilee Birth Centre but it closed shortly before my due date, I really wanted a calm birth in an environment that wasn’t clinical so decided to have a home birth. We hired the pool from Sandra and found the midwives to be very supportive of our choice. Even though this was my first baby I felt confident and relaxed about giving birth at home and knew this was the right choice for me and our baby.

Alex and I really wanted to meet our little bundle now but my due date of 22nd August came and went. I remembered Sandra saying babies come when they are ready and not on a set date but I was getting impatient. I hadn’t had any signs or symptoms, I felt exactly the same and fine. Three days later on the morning of Thursday 25th I woke up feeling different, can’t really describe it just different! I rang the midwife that night and she said to call back if there were any positive signs of labour. On the Friday I started with period like pains in my tummy but still wasn’t sure if it was labour or not. I was a bit worried as I wasn’t sure if this was normal at this point. I suppose I just assumed I would know if I was in labour. I rang the midwife again and she told me to have a bath and call her back when I was getting three ‘pains’ in ten minutes.

My mum came round and Sandra arrived around 1 o’clock, Sandra had agreed to stay with me during my birth. I was feeling relaxed at this point so we sat around chatting. Alex had blown the birthing pool up so all there was to do was wait and see. At about 4 o’clock Sandra did a relaxation and visualisation session with me and then as things did not seem to be progressing her and my mum left to get something to eat. I still wanted to know if I was in labour so again called the midwife who agreed to come round. After talking to me she decided I wasn’t in labour as I was so calm and was not in pain. She was going to leave but I said I would feel better if she examined me, at least then I would know I wasn’t in labour and could get some sleep. She was very surprised to find out I was 4cm at 7.30 I was so relived and excited that this really was labour and I would have my baby soon. Alex on the other hand was still not totally convinced that HypnoBirthing would work and he was dreading the worst.

Sandra arrived back around 8 o’clock and my mum and dad shortly after. Alex started filling the pool and I relaxed in my big comfy chair, just chilling. I kept thinking about going to straighten my hair for the photos but couldn’t really be bothered lol. With each surge, I went into my own little zone and breathed through them. I found the breathing techniques worked brilliantly and at no time was I unable to cope. Alex and I spent some time on our own and by 11.30 the surges had become stronger and closer together, I wanted to get in the pool but the midwife wanted to examine me again first. I was very disappointed when she said I was only 5cm, I was sure I would have been more. I got into the pool to see if it would speed things up a bit but I was too warm and I had to get out again. I went to the bathroom and I had a show, another good sign I thought. The surges were coming quick and fast and were causing me discomfort in my back. I still felt in control but decided to try the gas and air, after only a few breathes I didn’t want any more, it tasted disgusting. Sandra came back in from the other room and I asked her to stay.

Sandra and Alex both did the light touch massage which was really relaxing and helped more than gas and air. I remember at this point I just wanted a nap and then I started shaking a lot, which I had learnt on the course, was a sign of transition so knew things were moving along. Alex and Sandra helped me to get back into the pool and continued with the light touch massage.

Getting into the pool was pure bliss; the warm water eased the discomfort straight away. I was able to just float and relax. My mum came back in the room and stroked my arm. The atmosphere was quiet and calm, nobody felt the need to talk and I was able to zone out completely.

My baby moved down so slowly and gently, I didn’t need to push, my body just did the work for me. As I continued to breathe down Alex saw the head emerging, He shouted for the midwife who nearly missed the event as she was still in the other room. She didn’t interfere with the birth and I just continued to allow my baby to birth. My baby entered the world in calm and peace, no screaming, no pushing. I scooped my baby up out of the water and discovered we had a beautiful baby girl. Alex cut the cord after it had stopped pulsating.

Alex and I had some time on our own, gazing at our beautiful baby girl, I was so shocked that I had done it, so excited and happy. Alex kept saying I was amazing and I felt amazing. The midwife came back in and as there was no sign of my placenta being birthed she suggested I got out of the pool. Eliza was handed to Alex and everyone went in the other room to admire her.

After ten minutes still no placenta and I was offered a shot of pitocin, which I declined. I wanted my baby back and as soon as I held her my placenta came away. I didn’t need any stitches and felt amazing. Eliza Nancy was born at 1.50 am on the 27th August weighing 6lb 13oz.

Did HypnoBirthing work? Would I do it again? yes yes yes. Has Alex changed his mind about HypnoBirthing, Well put it this way He tells everyone about it and how awesome it is.