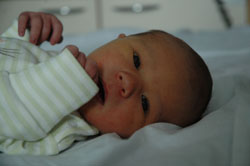 I was very nervous about being pregnant, labour and childbirth, so I felt I needed to be as prepared as possible. I also wanted to have some control over a situation I wasn’t sure it was possible to have control over. HypnoBirthing taught me more than how to have a relaxed birth; it allowed me to relax throughout my pregnancy and helped me discover how many choices I really had.

I loved our sessions with Sandra and I even started to look forward to the possibility of having the birth experience other people had managed to have through hypnobirthing.

Towards the end of my pregnancy things started to get a little more complicated, my blood pressure had increased and there were concerns that I might not be able to have my birth at my preferred location of the Jubilee Birth Centre. I had to have regular monitoring at the centre and was signed off work; anxiety about my blood pressure was certainly not helping. Sandra helped by using the techniques I had become accustomed to and focussing on reducing my blood pressure. This was very successful and my blood pressure returned to within the realms of normal!

My waters released early on the Tuesday morning but there was no sign of contractions, we contacted the Jubilee and they asked us to go in. the midwife explained that if I was to give birth at the centre I needed to begin labour within 72 hours, but ideally within 48 hours, she also wanted to perform an internal examination to check my waters had definitely released. Thanks to my preparation I felt confident in politely declining her offer, I was certain that my waters had released and I didn’t need poking to check. So, I was sent off with a pot of clary sage.

We went into town, as despite being two days over my due date we hadn’t bought the music CD’s we had planned, and typically my contractions began in HMV.

We returned home and I had a hot bath while Dyl read the relaxation scripts, things moved pretty quickly in this calm environment and within a couple of hours my contractions were every three minutes. Time to get to the Jubilee!

Unfortunately by the time I was admitted (8 pm) things had slowed right down and the gaps between surges seemed huge so the midwife ran me an aromatherapy bath and left me to it while she read my birth plan. The aromatherapy and hypno scripts did the trick and my surges returned with gusto.

We moved from the bath to the birthing room where my pool was ready filled. From this point I don’t have a huge recollection of what was going on around me. I remained very calm (except for two minutes during transition which certainly brought me back to reality), but I was pretty groany during the surges. Otherwise my room was silent, my midwife sat behind me, Dylan sat in front of me and supported me through the surges. I used a little gas and air, but I was nervous to use too much as I didn’t want to feel nauseous. I had been feeling a strong urge to bear down for quite a while but the midwife and encouraged me to try not to as I wasn’t fully dilated to, it came as a relief when she told me that I could go for it. The feeling of bearing down was uncontrollable; I certainly did no deliberate pushing. The muscles did all the work; I just had to go with my body.
Noah was born in two powerful surges. I reached into the water and lifted out my son. No assistance required. Our midwife was amazing; she congratulated me on delivering my own baby and took pictures! Within minutes I wanted to do it again, I have gone from being terrified of childbirth to wanting a decently sized family; I think another success for HypnoBirthing!