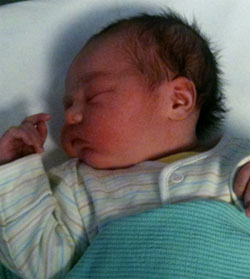 My baby was due 2 days ago. My family and friends keep asking questions and generally harassing me but I remained calm and relaxed and not focusing an awful lot on my “supposed” due date. So I was shocked when my baby showed signs of his or her arrival so close to the expected date.

I ate my dinner that evening about 6pm, put my plate down and instantly brought the whole thing back up again, as I had stomach ache. It was then that my husband and I realised that this could be the moment we had waited so long for. Andy put my relaxation CD’s on, brought me a duvet, turned the TV off and dimmed the lights in the room.

Before I knew it I was asking him to phone the hospital to let them know that I thought I should go in. The nurse asked to speak to me, and because I was calm and holding a decent conversation I was told to have a bath, continue doing what I was doing and call them later. I did as I was told and again before I knew it I was on the phone and again was told that because I still seemed to be managing that I should stay at home, I told them we were coming in!

We collected our bags and set off for the hospital and I continued listening to the hypnosis CD’s we had put in the car a few weeks earlier. Once we got into the hospital and were given our room, Andy turned the lights down low, and quickly put on my music and passed my birth plan to the midwives for them to read.

The midwives gave me a very brief and un-intrusive check over and told us that the baby was very close to arriving. After this initial update, they stood back, occasionally speaking quietly between themselves and leaving us to it. My husband had to leave the room at some point, so the midwife took over, reminding me to listen to my music and stay calm and relaxed.

After 2hours of being in hospital, I felt ready to push, I asked the midwives if I was ready, and they said “you do what you feel you need to” (following my birth plan, to the word) I was pushing for about an hour, but was calm and pretty excited about what would eventually happen.

Hughie Vincent was born 22.10.2010 at 1.50am. Weighing a healthy 8lb 10oz It was amazing; I felt full of energy and was particularly proud of myself for doing so much work without any intervention. Unfortunately I held on to the placenta. So an hour later I was wheeled down to surgery, which I was upset about because I had to leave Hughie behind with Andy, and also because I had to have a Spinal injection in surgery, but I was just so pleased that Hughie had been brought into the world drug free. I just kept patting myself on the back.

I honestly could have done the whole thing again days later, I enjoyed Hughie’s birth. Even today friends who listen to me say the word “enjoyment” just snigger and dismiss the enjoyment part.

I would recommend HypnoBirthing to everyone; both my husband and I were so relaxed. I don’t join in most people’s conversations about their births because I just sit there internally gloating about how mine was such a pleasant experience!