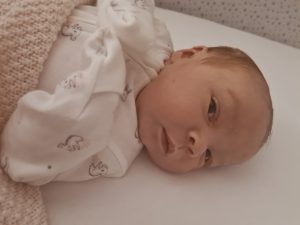 Charlotte and Matt here. Just to let you know the safe arrival of our baby daughter Jessica Alice.
We didn’t get the homebirth we planned but we still had an incredible experience and it was the best day of our lives  albeit tiring but we was able to still practice hypnobirthing even though ended up having c section. The staff listened to our wishes and read birth plan and accommodated were possible, informed decision where made throughout.
My waters went 7/9/21 naturally but began bleeding gradually. After 24 hours I had not progressed to established labour. Still got in pool at home to relax but had to make our way to hospital for monitoring and was admitted to labour ward when bed available (about 28 hours later). We set the room up with fairy lights, aromatherapy, spa music, dim lights and minimal disturbance.  She was head down but labour failed to progress as her head was positioned facing up, after 12 hrs on drip I was still only 2cm.  Shoulder dystocia was explained numerous times as she was a large baby. After having an informed discussion at that point we concluded that c section was the safest way forwards. They classed it as an obstructive labour due to her head position.  I’m trying to relay it but I may have some bits mixed up.
Theatre staff maintained my dignity at all times time. We got delayed clamping, skin 2 skin, delayed weighing, privacy after wards for us 3.
Jessca arived 9/9/21 1009am 9lbs 1.5 oz.
She is a very content baby, sleeps well for a newborn! Breastfeeding going great.
Can’t thank you enough.
Not what we expected but she’s here safely.
X x x
Charlotte and Matt