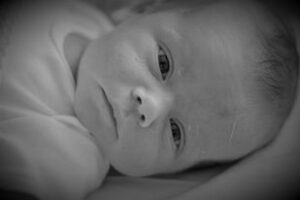 On Sunday 21st March 2021, I lost my mucus plug in the morning, so my husband and I spent the day together filled with lots of cuddles and kisses to release all those natural oxytocin’s. We both went to bed around 10:30pm after eating a hot curry and watching Friday Night Dinner to get us both giggling.

I woke up around 1am Monday morning with period pain cramps. I went to the toilet as I thought I just needed to release my bowls. Managed to get back to sleep but woke again around 2:40am. I let my husband know that I thought my labour had started and at around 4am, we enjoyed our last cuddle in bed together before finally giving in and going downstairs. I was too uncomfortable laid flat going through the surges.

I rang to notify the midwife team at 4:50am as my surges had become more frequent and I had 3 within 10 minutes lasting over 45 seconds. This was being tracked via the Freya App which I found to be very useful. I spoke to a wonderful lady who was very helpful, in turn I was advised to call back when they had intensified as I seamed to be handling them for now.

My husband set the pool up and I bounced on my ball. By this point my surges had slowed down so we were both able to get a bit of shut eye sat on the sofa. We then enjoyed a coffee and some cereal and put on Mrs Doubtfire to continue the giggles.

By lunch time my surges had really began to intensify, so my husband ran me a bath to help and he sat beside me to make sure I was okay and continued to time them via the app. I found that the water really soothed me. I got out the bath had a little wander around the house and garden. I then called the midwife team to let them know my surges had really ramped up. I had a lie down on the sofa as I felt exhausted.

First midwife Hannah arrived at around 2pm and performed her standard checks on me and baby. She confirmed everything was looking good. Second midwife arrived around 3:30pm.
The midwifes left just before 5:00pm. Labour sadly wasn’t established. They advised I try get some rest and call back when my surges were 3/4 every 10 minutes and the intensity had increased.

I attempted to lay down but as the day went on the surges were so intense I couldn’t lay flat. I broke down to my husband saying ‘I can’t do this!’ He was my rock! He read my affirmation cards to me and reminded me that yes I can do this and that my body was built to birth our child. He ran me another bath as that had helped before.

We then called the midwife again at around 9:00pm as I felt the surges had ramped up. She didn’t arrive until around 11:15 ish. She offered me an internal to which I declined at first, but then eventually accepted as I was dying to know how established I was. She performed the procedure but said she was unable to identify how far along I was due to the babies head being so low down. I broke down with this news!
She left at midnight and advised me to try get some sleep. Laying down was too much for me so I sat upright in my armchair. The surges were too intense so I left my husband to sleep on the sofa and went upstairs to run another bath. After this bath my husband and I got into bed, but the surges again were too intense and I had so much pain in my bum!it was becoming unbearable! I asked my husband if we could try out the tens machine we got with the pool, so we went downstairs to set this up on me. This I found helped me and we managed to try have another nap on the sofa and me sat in my armchair.
Sadly this lasted about 20 minutes, a very intense surge came and I had to stand up. I decided to try go to the toilet as there was so much pressure on my bum, I felt sure I needed to release my bowls. As I attempted to release by bowls, my waters broke with a gush! I called for my husband who came to see me. I advised him we needed to phone the midwife as there was meconium in the water. The midwife ward advised we had to come in for observation and to check on the baby.

We arrived at the hospital at 5:00am. As we went up to the labour ward, we turned the corner to see what felt like the longest corridor I had to walk down. Whilst walking in a surge took over and my waters gushed again. The tens machine continued to help, especially on the boost setting during these intense surges.

We were greeted by a lovely midwife who showed us to a room. She asked for a urine sample and for me to lay out on the bed so she could check baby over. Sadly due to the meconium I had gone from low risk to high risk as our baby had become very distressed which meant my home birth was out the window. I accepted that and told them that the safety of our baby was their priority and they were to do whatever means necessary to ensure our baby arrived safely. But I requested for everything to be explained to us before they did it.

After a vaginal examination I was told I was 9cm dilated. I was so relieved 😅! 28.5 hours with no pain relief, I felt like a superwoman! All be it a very tired superwoman.
I had been informed that our baby’s heart rate had decreased a lot and that the baby was becoming very distressed. They started to prep for theatre. Naturally panic set in for me but my husband helped me ride my surges through breathing and I believe this to have helped. The nurses said they have called the on call consultant out to us to arrange the csection.

The consultant arrived 20 minutes later and stood in the corner observing what was happening. He was okay with the progress I was making and the babies heart rate so didn’t feel the need for theatre. He remained in the room the entire time to be sure.
After an hour I was still 9cm so the midwife offered me a hormone drip to advance the last cm, also due to the fact baby was still very distressed. I agreed to this as I was exhausted and in so much pain.
I was given gas and air which helped to some extent, I think it was more so the distraction of using it. By this point my baby had gone back to back. No wonder I was in so much pain in my bum! Despite it not being the birth I had envisioned the midwife did have a read through our birthing plan and tried to adhere to my requests as much as she could. After 3 surge attempts to push baby out (which involved coaching from the midwife, one thing I didn’t want. But by this point I’d been in labour 27 hours and no longer cared!), the midwife said that she needed to cut me due to the babies head not coming. After declining to start with and the risks then being explained  to me about how my babies heart rate had dropped dangerously low, I agreed to be cut to avoid tearing. By the 5th surge the cut had been made and out came our little man and in love my husband and I fell! 😍💙

He was immediately put on skin to skin with me. Afterwards he enjoyed skin to skin with my husband whilst I had the bedding changed. After this he came back to me and latched on straight away. What a little guzzler he is! My husband was able to cut the cord after our requested delayed cord clamping. Due to internal bleeding the midwife insisted that she give me an injection to get my placenta out, I accepted this and out it came. I asked her to put it to one side as I wanted to examine it. Later that morning she talked us through it and it was all very fascinating.
The same midwife we had throughout the birth offered to go through everything again with us to make sure we understood why everything had to have been done the way it was. My husband and I agreed that we understood everything and that there was no need for further explanation. In turn we thanked her so much for helping our baby to arrive safely!
The next midwife on duty came through to see us and she was also very helpful. The first thing she did was take lots of photos of the three of us then offered me and my husband coffee and breakfast. Yes please!

So, despite this story not being the planned home birth I wanted, I’ve accepted my experience and think back of it and remind myself of the labour I went through with no pain relief and that I have a beautiful healthy son to love forever more! We are one happy new mummy and daddy.