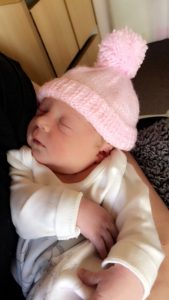 A wonderful experience even though plans changed.

When I thought about giving birth it absolutely petrified me, to the extent that I was asking around to see if I could choose to have a c-section. When I went to the hospital for the first time to talk about my pregnancy I burst into tears saying I was so worried about giving birth, the pain and all the things that could go wrong. To go from that to at the end of my pregnancy wanting to try no pain relief and a home a birth is an absolute miracle to me and it was all thanks to Sandra and hypnobirthing.

It was my boss at work that told me about hypnobirthing and it was the best thing I could of ever done. All I thought was I will try anything if it helps me with my anxiety and worry of giving birth. I was 5 months pregnant when I started my classes and after the first class I already felt a lot more confident, I learned a lot. By my end class I had decided I wanted a water birth at home!! Something I thought I would never say and I was actually excited to give birth.

I never thought I’d say this but I absolutely loved the whole experience from start to finish even giving birth with no pain relief!! I would do it all over again in a heartbeat and I would say for me, it was all thanks to hypnobirthing. It made me so excited and so ready for anything and everything that came my way, I went into it knowing so much more which made me feel so much more at ease. The anxiety I had was completely gone and all that was there was pure excitement! Sandra was so lovely and amazing. I would recommend her to anyone that is pregnant, especially first time mums!! I didn’t realise how much I didn’t know!!

Thank you Sandra for making the birth of my beautiful Bella so amazing..